You need to focus your marketing videos to what you do best. I know, Captain Obvious reporting for duty!… but I’ve seen plenty of business leaders get sidetracked.

Here’s the thing… you start producing a video and all of sudden everyone has an opinion. We should add this… we should add that… next thing you know you have a 7-minute video nobody will want to watch.

Questions to keep you focused

You really need to focus. What do we want to communicate? Who’s our audience? How do we serve them?

These are the questions you want to ask regardless of the type of video you’re producing. And About Us video… an event video… marketing a brand… you name it. What do we want to communicate? Who’s our audience? How do we serve them?

Staying focused will keep those outside voices at bay.

Holy cow! That was a break. I took two weeks off from blogging and most business activities, but now I’m ready to go.

Hope you had a great New Year’s because we’ll start with an observation I made that night.

If you watched any TV news coverage on New Year’s Eve, you probably saw video of people celebrating around the world. Sydney, Hong Kong, Dubai all checking in, but it wasn’t news outlets providing the video.

All three of those cities’ tourism bureaus shot the video, in some cases streaming live feeds, and provided it to news outlets.

This is something more and more businesses and organizations are doing. Shooting their own video and providing it to media, bloggers, etc. It’s a good idea because many of these content creators are looking for… well… content. The better the stuff you provide them, the more likely you’ll get covered.

Enter video… the best kind of contact out there. Why? People watch, that’s why.

Providing quality video is a great way to entice coverage.

You all know how much I like the idea of a video series. Instead of producing one long video, produce a series of shorter videos. It allows audience members to pick the things they’re interested in, and it allows you to roll out the videos over a longer period of time.

Well, Ford recently produced a whole series of videos while they were at the 2012 SEMA Show. According to the SEMA website, the show is “the premier automotive specialty products trade event in the world.”

I love that Ford produced a series there. They uploaded over 20 videos from the show. This is a great idea for any company participating in a trade show. It allows your customers and prospects to attend the show, even if they can’t get there in person.

The only problem is Ford fell flat. The videos stink. There’s barely any production value at all. The camera work is weak, the lighting is bad, audio on most of the videos is terrible, we get minimal editing and worst of all… zero attempt at storytelling.

Some of the videos feature a woman doing interviews, but they’re totally lame. Again, no creativity or effort put into them at all.

Could have been soooo much better

Now listen… if you’re a smaller company and this is the only type of thing you can afford to do, okay, I get it. But this isn’t just any business… it’s Ford! How many millions of dollars do you think Ford spends on marketing!? How much do you think they spent on participating in this event alone?

I’m not saying they should have thrown money hand over fist at this video series, but for $5,000-$10,000 they could have put together some great content. These videos got thousands of hits. Imagine what viewership could have been if they had made an effort. If they had made videos those viewers wanted to share with friends.

On top of that, let me raise another issue. As a business leader, why would you ever condone putting something out for the world to see that represents your brand if it looks like crap?

The Ford video series was a GREAT idea, but it was poorly executed. I hate that.

If you think a videos series is worth doing, then it should be worth doing it right.

I frequently preach something to clients and prospects and occasionally here as well. Produce video content that serves your audience instead of your ego.

The first video most businesses want to produce is the “about us” video. That’s fine. I think you should do that too, but that’s only a jumping off place. From there, businesses need to produce content that audience members can benefit from. That often means setting aside the instinct to make all your videos about you.

Alternatively, pick subjects you and your audience are passionate about and share your opinion and/or expertise.

Practice what we preach

Easy for me to say, right? Well, I practice what I preach. As a BrandSmart conference sponsor, T60 was permitted to email all the attendees. Instead of sending out a mass sales pitch, I offered links to my blog posts regarding the event, as well as a couple of videos from our “why our clients use video” series.

None of the content was about T60, but all of it afforded us the opportunity to display our expertise and provide conference attendees with information that could benefit them.

While we were all at the same event, I looked at it through my video “lens” and offered a perspective they might not have received. The videos are something else entirely. Two T60 clients offering their thoughts on why and how they use video as part of their marketing strategy.

How To Capture Attention At Corporate Events

We just recently completed our fourth annual video for Glenwood Academy, and something really stood out this year that anyone planning an event can learn from.

First, some background, the school is a non-profit in Chicago’s south suburbs. It’s a great school for good kids growing up in bad neighborhoods.

School leaders hold a fundraising luncheon every year before Thanksgiving. It’s a big deal. They hold it in the main ballroom at the Hilton Chicago. It’s about as swag an event space as you’re going to find.

This is the first year I’ve been able to attend, and I was impressed… big time. The school’s most generous donors and the kids from the school, all sitting at tables together mingling. There’s a live auction for some big-ticket items, and then an opportunity for people to make scholarship donations.

video’s role at the event

Before the scholarship donations, school leaders show a video. This is where we come in. The task we’re given every year is to bring to life Glenwood’s students and help people see and feel how their donations make a difference.

The theme behind this year’s video was “a day in the life” of Glenwood’s students. I was happy to hear the audience give it a big ovation.

What you can learn from Glenwood

Here’s what everyone can learn from Glenwood. First, they spend the money to produce a quality video. This is a big-time event with important people, and they want a video to match the event. Glenwood may be a non-profit, but they understand the power of video and clearly believe they’re getting a return on their investment.

Second, they know how to stage things. The video came in a little more than half-way through the program. Just when people’s interest or attention might be fading, they hit them with a video. It perked up everyone and got them ready to open their wallets for the main part of the fundraising.

Folks… their leaders “get” it. Video has the power to grab an audience’s attention and get them pumped-up about the subject at hand.

You need video at your corporate events.

Planning Ahead Leads To Video Success

Planning ahead can save you a lot of headaches. That’s true with many things, but especially video.

During a vlog shoot this week for one of our clients, the CEO spoke about the organization’s national conference. Following the shoot, I smiled and asked their corporate communications director what videos she wanted to produce surrounding the conference.

Somewhat bold of me, but she loved the idea. She said she really needs to start thinking about that and planning ahead.

Why you Should plan ahead

Yes, she does. We all do. When you start planning your videos in advance, you’ll be surprised about how things fall into place. The shoot is less hectic, and the results are frequently better. Usually because the video fits into a greater PR or marketing plan.

It doesn’t have to be the details for how every aspect of the videos are going to be produced. I’m talking about having a plan for what stories you want to tell.

Who’s are audience? What stories will impact them? These are the things you want to discuss in advance.

The better organized you are from the beginning, the more likely your videos will impress. 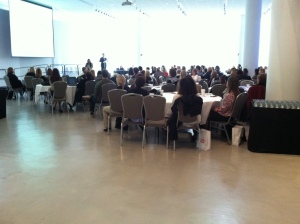 No surprise… a big topic of conversation at BrandSmart 2012 was the rise of mobile and what it means to marketing. A question asked during one of the panels is if video has a role.

Mobile video is brilliant, but…

There was a little push-back from Ro Kumar, CEO at Digital Aisle. He cautioned the audience saying video in that situation needs special care. The issue… length. Mr. Kumar says the last thing customer are going to want to do is stand in an aisle watching a long video.

Agreed. I blogged yesterday about producing videos focused on your audience. That’s true when it comes to selecting your content, but it also means considering where they’ll watch the video.

If you have a captive audience at a meeting or an industry conference like BrandSmart (virtually all the presenters used video), you can show a 3-4 minute video. If your audience is watching on a smart phone in a store, you better keep it short. I’d suggest 1-minute or less.

Mobile is here and video has a role, but you still need to know your audience.